Protocol and etiquette during mealtime 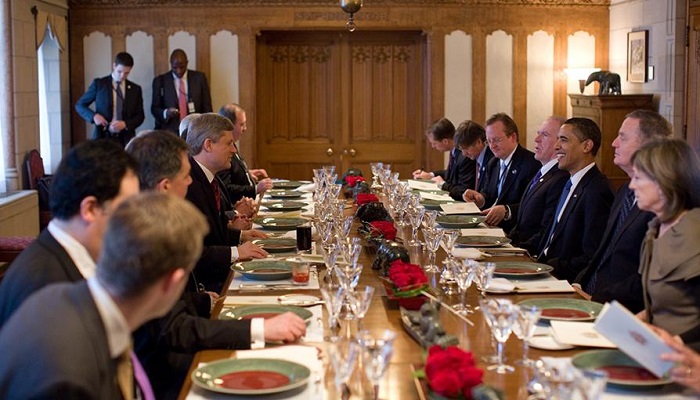 Nevertheless you are invited to a formal reception or it comes down to a dinner/ lunch at a restaurant, it would surely be helpful to be aware of the behavior allowed by the etiquette and protocol on the table.

- When you are invited to an official dinner, do not change the seat that your hosts assigned to you. They have certainly put great effort into arranging their guests so that those who sit close to each other, have common topics to talk about.

- You are expected to talk to those who are sitting on your two sides. You may have come together with a colleague or a family member, but that does not mean to speak only with them.

- If you are at a restaurant, do not start eating until everybody at your table has been served their meal. If you attend an official dinner, wait for your host to start eating first unless he himself has insisted on the opposite.

- Do not take out drugs on the table. Even if you have to drink them before meal, do it in the most discreet manner.

- Do not put your lipstick on immediately after having your meal.

- Do not put your cell phone on the table - keep it under the table in your bag. If you have not muted it and it rang, take it out without looking at the display, pick it up and explain that you cannot talk at the moment and you would call later. Then apologize to the people around you. Do not let them think that whoever is calling is more important than them.

- Do not offer the others your food and do not ask to try some from theirs.

- Do not stretch across the table if you want something from the other edge. Instead, ask someone to pass it to you.

- As to whether women should order first, we could say that, in fact, privileged are those who have made their choice first. Thus, they give others more time to go through the menu.

- In terms of paying the bill, gender no longer plays a role. In the past, women might have been given a menu without prices but nowadays the bill pays the one who made the invitation.

The utensils are arranged in the order in which you will use them. You start from the outermost and move to the others. Knives and spoons are in the right and forks – in the left.

The knife is by rule being hold by the part of the handle where the blade is. The only exception is the knife for fish, which is being hold as a pencil.

The American way of having a meal

When they have finished with their meal, they put their fork and knife down on the right side of the plate. If we imagined that the plate is a clock, the upper part of the instruments would point at ten o'clock, and the handles would point at eight o’clock.

European way of having a meal

Europeans cut their food as Americans do, but eat with the left hand. One doesn’t need to leave the knife and fork after every bite, but one have to when they want to take some bread or drink from their glass.

As to how to hold the glasses, experts advise to grab wine glasses by the stem, otherwise you would change the temperature of the wine, and thus its taste. This is not applicable for the water glass- you don’t have to hold it by the stem but by the part just above it.

If you do not want to be served some of the drinks, don’t turn the glass upside down but put your hand over it when the waiter comes over and say "No, thank you."

Another thing you should not do:  don’t in any case clatter with the instruments on the glasses in order to attract attention.

The etiquette for behavior at the table and taboos should not be overlooked, as they largely affect our performance in the society.